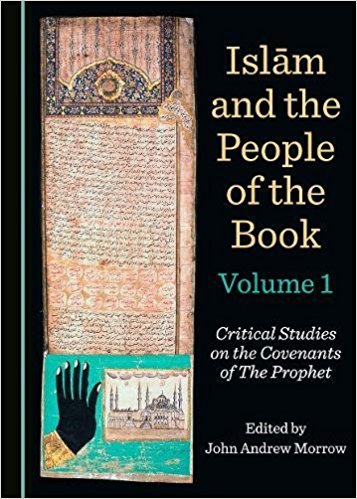 Islam and the People of the Book, Volumes 1-3

Critical Studies on the Covenants of the Prophet

Both the 2013 book and the 2017 extended documentation are praised by many Islamic and Christian religious leaders and scholars as an effective antidote to the negative image of Islam spread by ISIS and other self-declared radical Muslims, and I have personally witnessed Dr. Sayyid Syeed, Emeritus National Director for the Office for Interfaith and Community Alliances for the Islamic Society of North America, endorse it as one of the most important contemporary developments that will help to balance the image of Islam in the world. On the other hand, it must be said that many scholars are quite hesitant to acknowledge the historical value of these covenants for two reasons.

In the first place, it is clear that the copies that have been preserved in the archives and the monasteries are substantially younger than the originals from which they claim to be copied. It is therefore quite possible that the documents have a later origin and cannot be used as evidence of Muhammad’s personal attitude toward Christian groups. In the second place, the text of the documents strongly suggests a situation in which Christians need protection by Muslim authorities, presupposing a rather established and wide-reaching Muslim administration. On the one hand, quite a few historians have argued that such covenants were most likely forged by Christian groups who could not produce any more powerful means for their protection than a document supposedly signed by the Prophet himself. On the other hand, John Andrew Morrow and other defenders of the authenticity of these covenants are able to show that there is a multiple attestation (tawātur in hadith science) of such covenants, which in itself shows that the texts of the covenants were acceptable not only to Christians but also to Muslims as arguments on a traditional basis.

Since I am not an historian, but a theologian interested in Christian-Muslim relations, I am glad that the Covenants Initiative has been able to highlight a positive approach to Christians and other People of Scripture in the early history of Islam, even if this approach cannot be traced back to Prophet Muhammad. In my own studies of the term ahl al-kitāb—usually translated “People of the Book”—in the Qur’ān I have noticed that most texts addressing Jews and Christians as “People of Scripture” contain strong polemical elements. Yet they are based on actual or fictional dialogues in which the Qur’ān argues against Jews and Christians who trust their own religious traditions rather than being receptive to God’s revelation. Modern uses of terms like “People of the Book,” “A Common Word,” or “Abrahamic Religions” as labels of what we all have in common are therefore misleading, because they indicate differences rather than commonalities. Yet they do so on the basis of an insight that human beings are in this world together and that they are created to find a better understanding by using their differences as mirrors to “emulate one another in doing good,” as the Qur’ān famously states.

The three volumes of Islām and the People of the Book help us to come to a better understanding by bringing together the voices of many scholars who investigate the historical and contemporary possibilities of highlighting the Covenants of the Prophet Muhammad with the different People of the Book. They do not help as much when the argument is narrowed down to the particular issue of authenticity, especially when the confrontation with critics takes on a strong ad hominem flavor as happens in Morrow’s first chapter. Many chapters that follow are just strings of endless citations that give the impression of a very intense but also very myopic form of scholarship. Morrow tends to overstate his case, for instance when he writes at the end of the second volume that “the Covenants of the Prophet should sit side by side with the Qur’ān on the bookshelf of every believer” (II:544). Even if the covenants contain the actual words of the Prophet, still his sunna is not the very Word of God. At the same time, Morrow is right when he writes on the same page that the covenants “need to be studied, criticized, and scrutinized. And they need to launch scholars from a multitude of complementary fields in various directions.” Much work needs to be done, especially since I have not encountered many names of scholars that are well-known in the Western academic world of Qur’anic and Islamic studies among the contributors to these three volumes. In that sense, the Critical Studies of the Covenants of the Prophet are still in their infancy. But we should be grateful that Morrow and his collaborators in the Covenants Initiative have worked tirelessly to give us these dialogue-oriented testimonies from the world of early Islam.

About the Reviewer(s):
Wilhelmus (Pim) Valkenberg is Ordinary Professor of Religion and Culture at the Catholic University of America.