Skip to content
Search
The International Museum of Muslim Cultures has thrived for 16 years in Jackson, growing from a little-known exhibit to an internationally known archive. But its impact in education, advocacy, religious co-existence — even its very existence — is not widely known in its home city.

The institution was the first museum in the United States dedicated to international Muslim cultures and histories, and its creators aspired to unite people through education. It’s currently one of four U.S. museums celebrating some aspect of Islam and its followers: America’s Islamic Heritage Museum in Washington, D.C., which conserves the history of Muslim Americans; the New African Center in Philadelphia, which preserves African American Muslim history, and the Arab American National Museum in Dearborn, Mich., which is dedicated to showcasing Arab American history and culture.

People from approximately 40 states and 35 other countries, such as Senegal, Mali, Indonesia and Turkey, have visited the Jackson museum.

The prestigious W.K. Kellogg Foundation has provided significant financial support. In May 2017, the foundation awarded a $600,000 grant to fund the museum’s “Bridging Cultures: Working for Equity Across Race, Class, Religion and Ethnicity” project. The goal of this project is to “utilize the power of the museum to mobilize cross-racial healing, justice and human dignity.”

That was the museum’s third Kellogg grant since 2006. The first two were for $31,000 (2006-2007) and for $150,00 (2013-2015). Like the museum, the foundation says it is committed to racial equity and the mission to “support children, families and communities as they strengthen to achieve success as individuals and as contributors to society.”

A key component of that accomplishing the mission is the “Timbuktu Human Dignity” curriculum that focuses on helping re-establish a sense of human dignity and unleashing the potential of youth of the African diaspora.

To Okolo Rashid, a co-founder of the museum and its president, the concept of human dignity is about having a sense of “inherent nobility, worth, honor and a born-sense of leadership and self-governance, which is the endowment of every human being.” She says this is the same concept that’s in the Declaration of Independence:

“We hold these truths to be self-evident, that all men are created equal, that they are endowed by their Creator with certain unalienable Rights, that among these are Life, Liberty and the pursuit of Happiness.”

Emad Al-Turk, the museum’s other co-founder and its board chairman, says African American visitors will learn they came from educated, rich, civilized and cultured societies, which “is not what they learn in school.” Rashid also notes how many school lessons begin with slavery when it comes to African American history, but there’s so much more.

“Many African Americans are searching for who they are, where they came from and what their roots and traditions are,” Al-Turk said. “This is an excellent way of connecting.”

So far, Rashid says she has seen success with this curriculum in two pilot programs. These pilots were tested in the at Brinkley Middle School and Lanier High School in Jackson as a year-long elective and in the Holmes County school district with a select group of middle and high school African American male students as a year-long after-school program. Holmes County is has the poorest demographic in the U.S. while Jackson public school system is the second largest school district in Mississippi.

This curriculum is a branch of the museum’s current exhibit called “The Legacy of Timbuktu: Wonders of the Written Word,” which was revealed in November 2006. This exhibit emphasizes West Africa’s Islamic culture and history via the historic city of Timbuktu in Mali, which was the center of education in West Africa between the 13th and 17th centuries.

Al-Turk and Rashid hope this exhibit will positively influence visitors and especially uplift the African American community locally and around the nation. The Timbuktu exhibit is scheduled to tour the nation in select cities in the 2020.

The manuscripts and many of the artifacts belong to the exhibit’s partner, Abdel Kader Haidara, who is founder of the Mamma Haidara Library in Timbuktu. Haidara’s family has lived in Timbuktu since the 15th century and has been passing down artifacts through its generations.

Also displayed are a blacksmith’s tools and products, a Malian bride’s traditional headdress and a model of the Great Mosque of Djenné. Visitors learn how women were held in high esteem in society and were independent, how the famous 14th-century traveler Ibn Battuta considered Timbuktu one of the safest places to travel, and how Malians made their own striped paper. 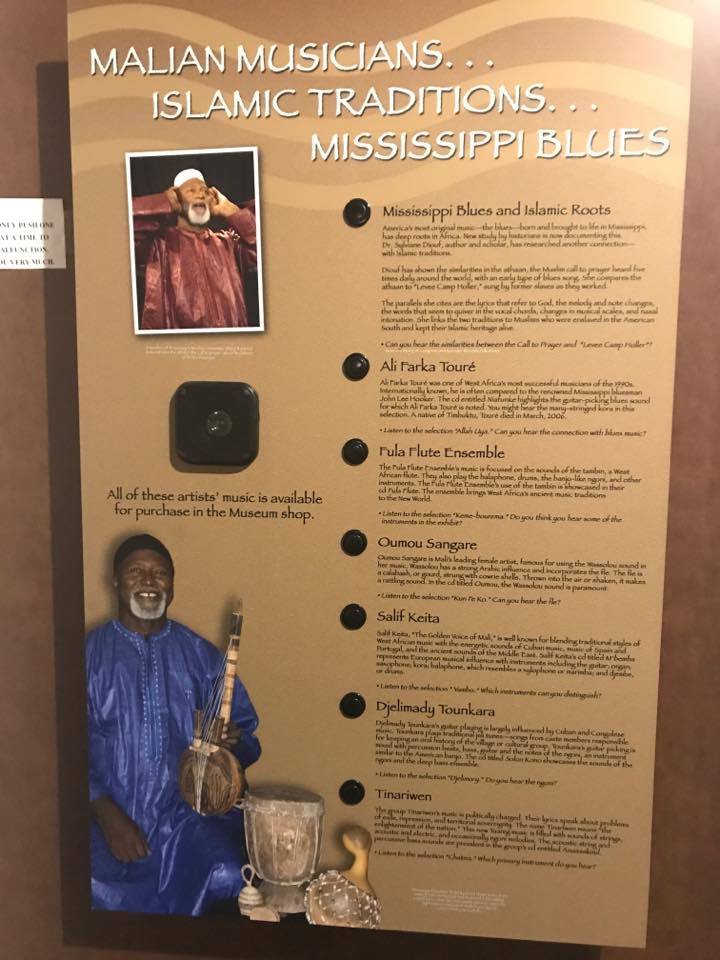 The sound of Blues music has been traced back to the adhan, the Muslim call to prayer. 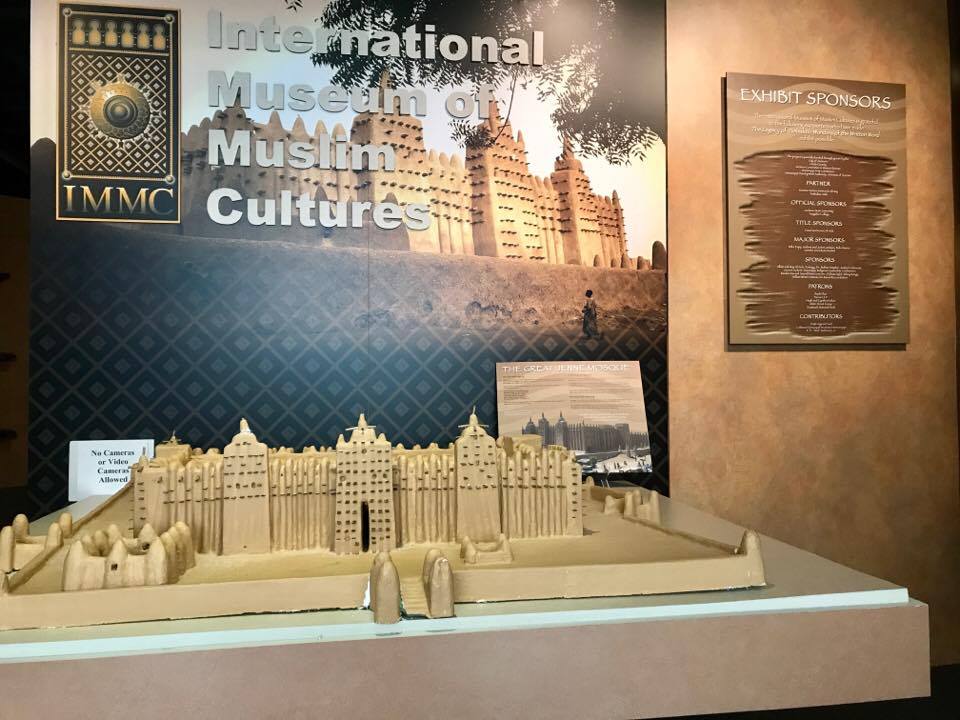 When visitors enter the Timbuktu exhibit they see the Great Moque of Djenné, which is the largest building in the world made out of adobe. 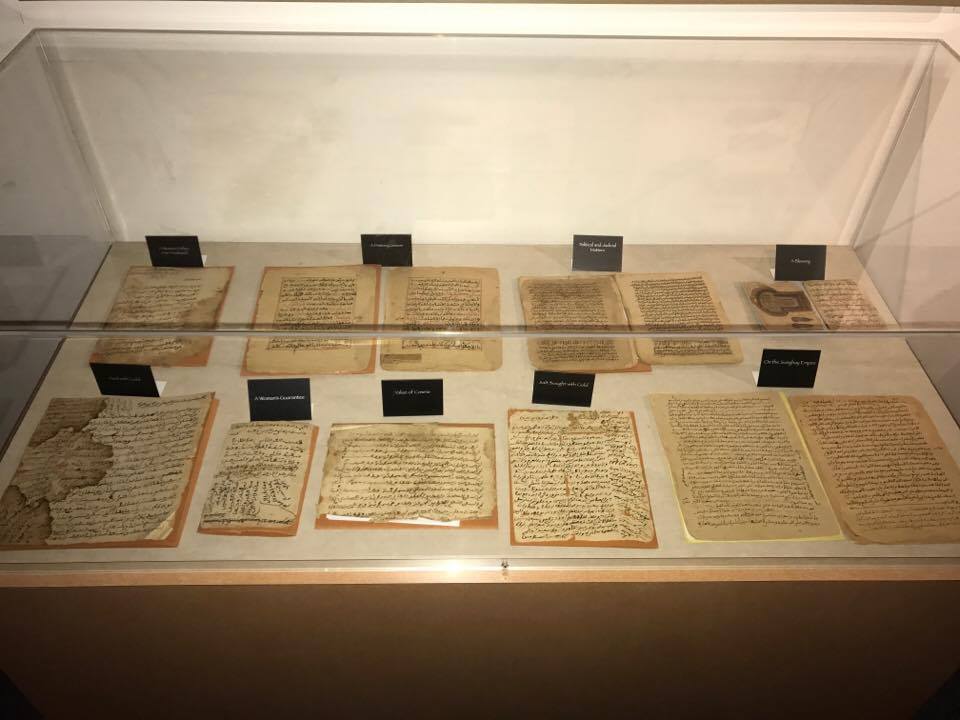 The museum has 40 ancient Malian manuscripts covering an array of topics.

The sound of Blues music has been traced back to the adhan, the Muslim call to prayer.

When visitors enter the Timbuktu exhibit they see the Great Moque of Djenné, which is the largest building in the world made out of adobe.

Take a look at this slideshow to see more photos from the Timbuktu exhibit.

Roysean Tuyrez Philson, a 6th grade teacher for Teach for America in Ferriday, La., says while touring the museum he was fascinated by the trends West Africans set, the education they created and by how intelligent African Muslims were.

“I didn’t know these things because the history that I grew up learning in my school systems told it from a very biased perspective,” said Philson, who was raised in South Carolina. “We have to be open to hearing perspectives that are different than what we grew up hearing. It shed beauty on a beautiful culture.”

PUSHING FORWARD THE PRESENT THROUGH ITS PAST

Al-Turk says the museum isn’t not only an educational facility but also an activist organization, “arming people with information to allow them to do better for the entire community.”

The goal of the museum is to share the contributions of Muslims and Islam throughout history and no longer allow the media to define who Muslims are or what Islam is, according to Al-Turk. He says this is especially important in this current time of Islamophobia shown by the public and even elected officials.

“The first question we get is, ‘Wow, how do you have a Muslim museum in Jackson, Miss., and why do you have it here?’” Al-Turk said. “Why not? This is the center of the Civil Rights movement and what’s happening to the Muslim community is an extension of that movement.”

Al-Turk hopes the museum is contributing to the improvement of relations between Muslims and non-Muslims in the U.S. and around the world.

Another step toward this goal is the exhibit set to open in November called “Muslim with Christians and Jews: An Exhibition of Covenants and Co-Existence.” It’s based on John Andrew Morrow’s book “The Covenant of Prophet Muhammad with the Christians of the World.”

The exhibit will feature five covenants that were written to extend protection to Jews, Christians and others by the Prophet Muhammad and his people, one of the earliest constitutions in history (the Constitution of Medina) and a two-dimensional trade caravan, among other things.

The goal of this exhibit is to showcase Islam’s principle of religious coexistence, to introduce the leadership duality of Prophet Muhammad as a civic and religious leader, and to address Islamophobia with a message of understanding and tolerance.

Islam has historically promoted peace, Al-Turk said, and many things some Muslims claim to do in the name of Islam are not Islamic in nature, including groups such as ISIS, Hamas and Al-Qaeda.

“Our role in the museum is to educate the general public, Muslims and non-Muslims, about what Islam is and about the role of Islam,” Al-Turk said.

This exhibit is set to tour in Chicago, Atlanta, the Dallas-Forth Worth area, Detroit and major cities in New York and California in 2018. It will be open to the public and stationary in Jackson Nov. 30, 2017-April 2018.

“We want to take our exhibit and the work we’re doing to advocate our message outside of the museum walls,” Al-Turk said. “We want, over time, for millions of people to embrace the message of what we’re talking about.”